Central anti-tuberculosis dispensary: a modern paradigm in the centre of Barcelona

The architectural complex of the Central Anti-Tuberculosis Dispensary is one of the emblematic constructions by the Group of Catalan Architects and Technicians for the Progress of Contemporary Architecture (GATCPAC). Located on an irregular site on the curved lane of passatge San Bernat in the old part of Barcelona, it is one of the best examples of rationalist architecture in Spain. And of course, of hospital architecture.

The goal of the Central Anti-Tuberculosis Dispensary was to centralise tuberculosis treatment in the country, whose cases had increased since the beginning of the 19th century due to poor social and sanitary conditions.

In 1934, the architects Josep Lluís Sert, Josep Torres i Clavé and Joan B. Subirana, members of the Group of Catalan Architects and Technicians for the Progress of Contemporary Architecture (GATCPAC), took on the project, which was completed in 1938. Despite the limitations imposed by municipal ordinances, the project was carried out while maintaining the initial design. The joint programme included different functions: 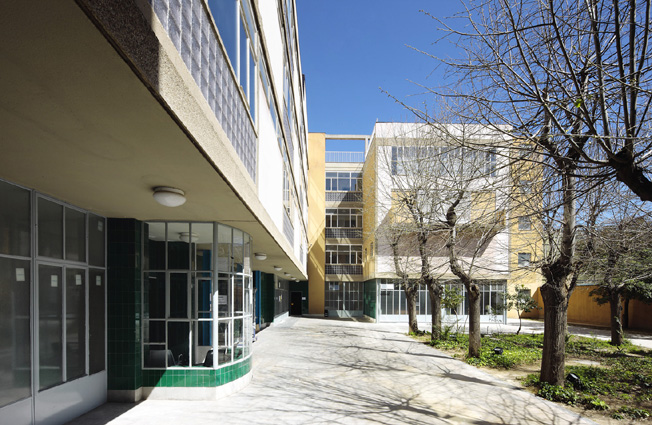 EMBLEMATIC PROJECT OF THE MODERN MOVEMENT

The Central Anti-Tuberculosis Dispensary is part of the group of buildings listed by the Iberian DOCOMOMO Foundation, whose objective is to preserve the heritage of the Modern Movement. The architectural complex of the Dispensary is a characteristic project of this period.

The teachings of Dr. Lluís Sayé were key in the design of vital aspects of the project. Accordingly, ventilation and air circulation, as well as correct sun exposure, were essential in the treatment of tuberculosis.

The baseline was the same as the one devised by the architect Alvar Aalto for the Paimio Sanatorium (Finland): from architectural rationalism towards a more humane conception of healthcare spaces. Today, this trend towards the humanisation of hospitals continues to be an inescapable parameter for health and serves as a guide for various hospital projects.

The Central Anti-Tuberculosis Dispensary complex, made up of three connected spaces, has an L-shaped layout and opens out to the interior of the block. The main entrance is through the inner garden. The urban sponge created by the garden follows the parameters of the public health ideas of the time, prioritising green spaces in densely populated areas of the city.

The Dispensary was an opportunity to take action regarding the urban problems linked to the sanitation of the centre of Barcelona. With the construction of this public building, although expedient, the project made it possible to generate more free spaces in a congested urban environment. And it promoted the basic premise about ventilation and sunlight.

At the site, three main spaces define the project, each with a different function:

On the ground floor of one of the main buildings are the examination and diagnostic areas. The upper floors are reserved for administrative tasks and laboratories. The second building houses the children’s dispensary, as well as the library and the conference room.

The choice of the construction system follows to the same design clarity. The elements chosen for the envelope are coherent in the entire complex. And the composition of each facade is differentiated according to the functions of the spaces they house. Despite this distinction, the materials common to all spaces contribute to the unity in the modulated window facades.

The metal profile structure differs from the enclosures designed with new lightweight materials. A very clear modulation addresses the structural composition. And in those days, it allowed an economy of materials, which was unusual.

EXAMPLE OF THE ARCHITECTURAL VALUES OF GATCPAC

In short, the complex is a manifesto of the architectural values held by GATCPAC:

With the Central Anti-Tuberculosis Dispensary, and other later projects, the GATCPAC team laid the foundations of the Macià Plan in Barcelona, based on the application of the premises of Le Corbusier’s Ville Radieuse.