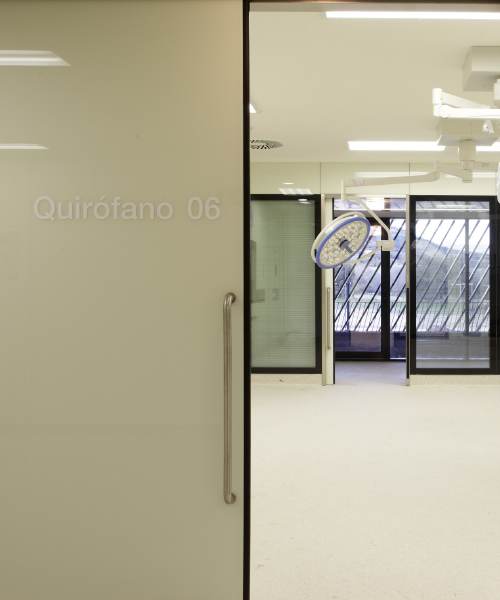 In 2010 we accepted the task of designing and building Collado Villalba General Hospital, with the core principles of constructing a low-impact building in the natural setting of the northern Madrid mountain range that would also be beneficial for the health of its patients and staff. Both of these goals were achieved thanks to innovative solutions, for which ENERO received the Design & Health International Academy Award (Highly Commended) in 2013.

We designed a compact building, measuring 69,000 square meters, aimed at fostering the patient ́s recovery from the moment they set foot in the hospital, while simultaneously optimizing the flow of foot traffic. Various circuits and paths are distributed according to patient need (medical consultations, diagnostic tests, treatment or hospitalization), so that the admission and exam areas are in the entrance, while the emergency department and the hospitalization and operating blocks are on the other end. Diagnostic and treatment areas are located between these two poles.

The hospital is composed of 140 patient rooms, 87 exam rooms and 9 operating rooms. Distances are calculated on a human scale, with the aim of reducing internal transit time while also keeping public and private spaces separate, which has allowed for a higher quality of patient attention. One of ENERO ́s chief goals is to facilitate the sustainability of both hospitals and the healthcare system working within them, which is why we designed this one to have a low environmental impact. The use of local and efficient materials was fundamental in maximizing the intangible value of the surroundings, while simultaneously achieving an optimal integration with the landscape, something which improved the experience of the patient, their visitors and the hospital ́s staff.

The hospital building replicates the surrounding area ́s granite mountain range, in an aesthetic game in which a hard skin is added to a soft one, of glass partitions and skylights, to create a light and transparent interior space, protected and obscured by the surrounding environment. The rooftop terraces were designed to create a garden accessible by patients and their visitors, where they could enjoy a pleasant and scenic space.

86% of the building takes advantage of natural light, while simultaneously opting for renewable energies, for a total savings of up to 30% on energy and light. In addition, many of the earth-moving materials were reused and more than 2,200 trees of native species were reforested, further establishing the Collado Villalba Hospital as a building which prioritizes sustainability and humanization.